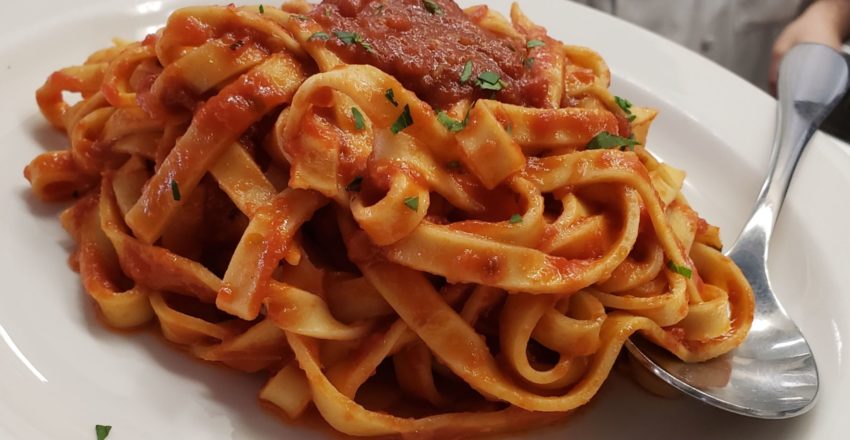 No Mincing Words about Bolognese

Frequently bubbling away on our burners here at Il Porcellino is a large pot of sugo Bolognese.  Probably Italy’s most recognized ragu and one of our most popular as well.

Bolognese, is a meat based sauce, originating as its name suggests, from Bologna. It is a thick, slow simmered sauce that begins with a classic soffritto (celery, onion and carrot) to which minced meat is added followed by red or white wine and small amount of tomatoes or tomato concentrate.  Here at the restaurant, our sauce contains a mix of beef and veal which we trim and grind in house.

The origins of the sauce date back to the 18th century with the earliest published recipe coming from Pellegrino Artusi in 1891. The recipe detailed in Artusi’s cookbook called for a fine mince of veal filet, pancetta, onion and carrot which were cooked with butter until the meat browned then covered and cooked with broth.  He suggested adding dried mushrooms, slices of truffle or chicken liver for additional flavor if desired and finishing off the sauce with some cream once cooked, to make it smoother.  Artusi recommended serving the sauce with a medium sized pasta and Parmigiano cheese.

The evolution of the dish saw the addition of tomato (either puree or concentrate) along with wine and beef becoming the dominant meat over veal.  The most notable change was the preferred choice of pasta which is tagliatelle.  As with many popular Italian dishes, many variations exist but in 1982 the Italian Academy of Cuisine (an organization dedicated to preserving Italy’s culinary heritage) in collaboration with the Bologna Chamber of Commerce recorded and official recipe for classic Bolognese ragu.  The official ingredients being beef cut from the plate section, fresh unsmoked pancetta, onions, carrot, celery, tomato purée, meat broth, dry red or white wine, milk, salt and pepper.

While in Italy the sauce is customarily paired with tagliatelle, here at Il Porcellino you will find it in our lasagna, our pasta al forno and generously ladled over spaghetti. So come in and have a taste to see we don’t mince words when it comes to our Bolognese, we only mince meat.